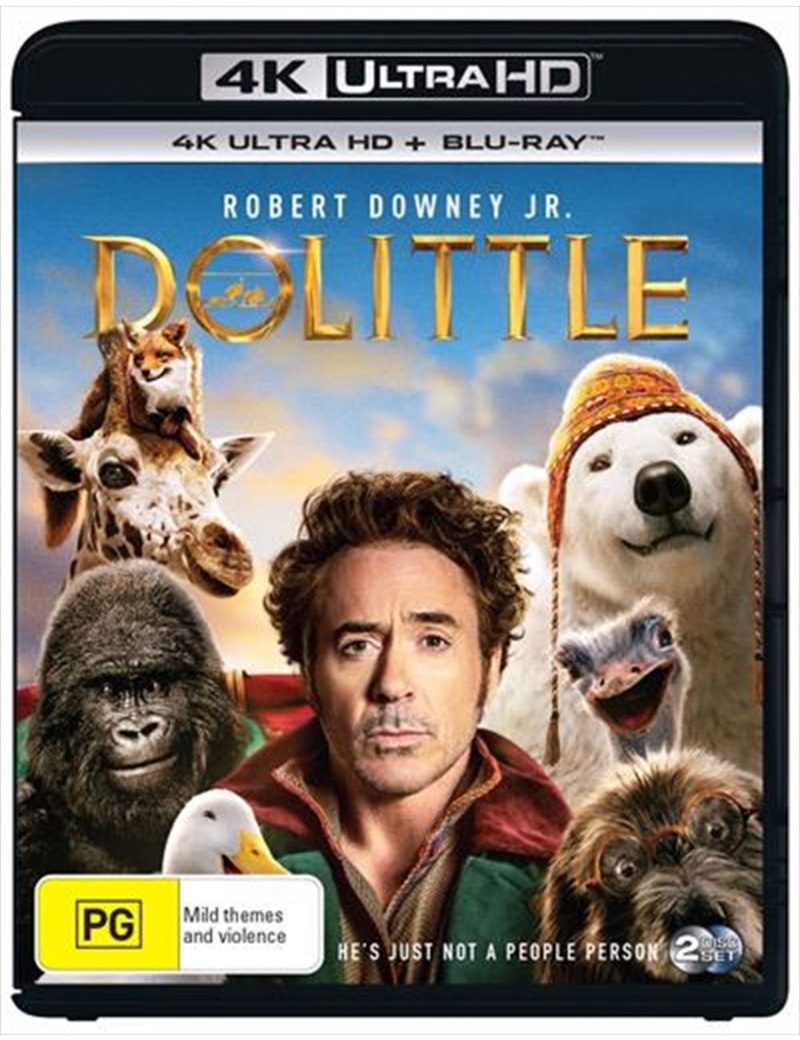 4 interest free payments of $12.75
No refunds for Change of Mind for this item provided by third-party sellers

He's not just a people person.

A physician discovers that he can talk to animals. After losing his wife seven years earlier, the eccentric Dr. John Dolittle, famed doctor and veterinarian of Queen Victorias England, hermits himself away behind the high walls of Dolittle Manor with only his menagerie of exotic animals for company. But when the young queen falls gravely ill, a reluctant Dolittle is forced to set sail on an epic adventure to a mythical island in search of a cure, regaining his wit and courage as he crosses old adversaries and discovers wondrous creatures.

Review of Dolittle by Christopher Pattison

After Robert Downey Jr’s Marvel contract had ended I think the whole world collectively asked ‘What will he do next?’. Downey Jr’s first project post his role as Iron Man is none other than Doctor Dolittle. Dolittle was a film I was excited to see, anytime that Downey Jr. is attached to a project sparks excitement with me and tis film was no different. Filled with dazzling visuals and a charismatic performance from Downey Jr, there is a lot to love in Dolittle. The story follows Dr Dolittle on a quest across oceans to find someone from his past, this is vastly different from the Doctor Dolittle we have had previously. The Eddie Murphy films from the early 2000’s is more of a comedy film where this is more of a fantasy rather than a straight comedy. The film like I mentioned has dazzling visuals, the effects feel lively and fantastical, which will definitely appeal to a younger audience. There is an impressive voice cast as well that make up our furry cast of characters, including: Tom Holland, Ralph Fiennes, Octavia Spencer, John Cena and Emma Thompson, just to name a few. This is a film that will definitely appeal; to families, its fun, light-hearted and full of adventure. Pick this one up today on Blu-Ray or 4K UHD.

Review of Dolittle by Peter Walkden

Dr John Dolittle (Robert Downey Jr.) is a physician who has learnt to speak to animals. After his wife passes away, the good Dr Dolittle goes into hiding from the world. Suddenly his world changes when he hears that Queen Victoria is extremely unwell and only he can save her.
Discovering that the only thing that can cure the Queen is a fruit located on a mysterious island only reachable by sea, Dr Dolittle eventually accepts the mission to save the Queen. But don't worry- he won't be going alone. Joining him on the journey across the seas is his crew of talking animals.
In case you're not aware, this film has no connection to the 1998 and 2001 Dr Dolittle movies, both of which starred Eddie Murphy. Dolittle (2020) serves as a reboot. As a plot, it's obvious this film is attempting to stay true to stories about Dr Dolittle. In these stories Dolittle wasn't just a vet working in an office building- he was a man who sailed over the seas in a big ship helping many animals (or at least that's the version my mother used to read to me at bedtime when I was a child).
In regards to the humour of Dolittle, the jokes here are cheesy and sometimes childish. It's obvious that this film is aiming to be a fun, brainless family film. While the plot is basic, some younger audiences may be scared by certain scenes. While the humour may not be my taste in a film, I promise you there will be many who will smile and chuckle while watching this film.