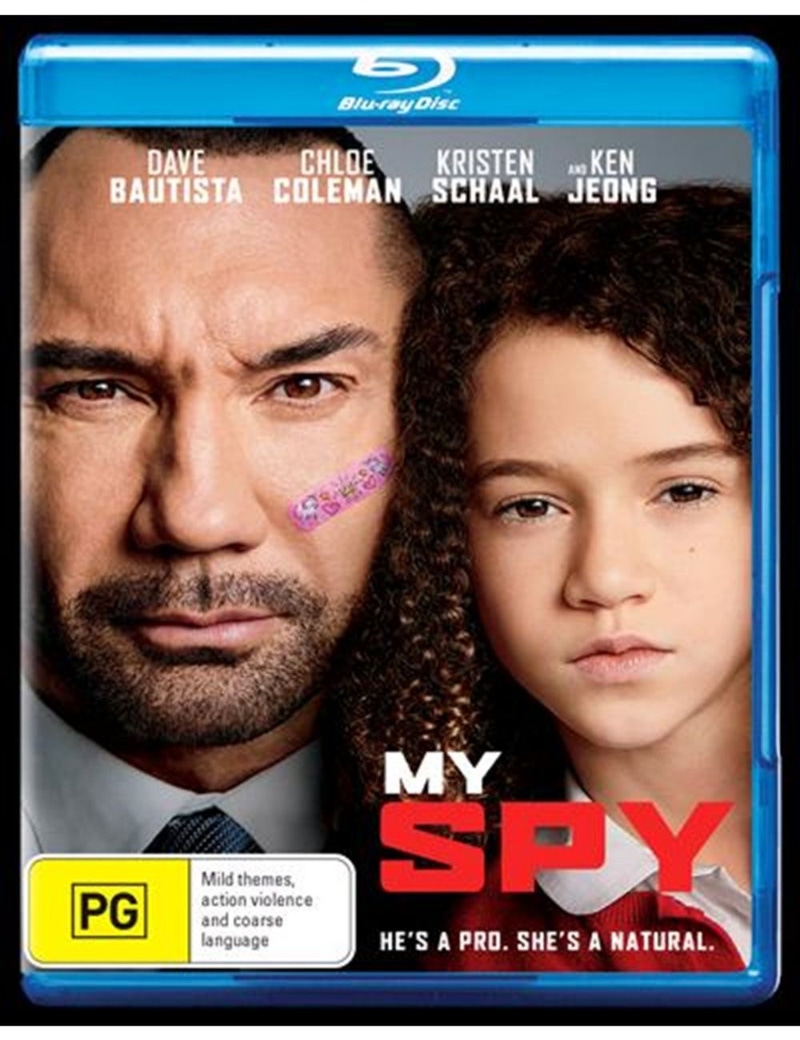 A hardened CIA operative finds himself at the mercy of a precocious 9-year-old girl, having been sent undercover to surveil her family.

Review of My Spy by Christopher Pattison

In recent years, family comedies seem to be few and far between. It is a genre that was over-exposed in the early 2000’s with actors such as Vin Diesel, Ice Cube and Eddie Murphy starring in a lot of these films and dominating this niche genre. But in recent years, the trend seems to have disappeared nearly entirely with many of these films either falling by the way side or just ceasing to exist entirely. Enter former WWE star Dave Bautista… ‘My Spy’ follows JJ (played by Dave Bautista), a hardened CIA operative who is sent undercover to survey a suburban family where he finally meets his match in a 9 year old girl, Sophie (played by Chloe Coleman). Does JJ have what it takes to get the Intel or has he met his weakness in 9-year-old Sophie? ‘My Spy’ was a film I missed in theatres and I am very disappointed that I did, this is a fun, energetic and enjoyable family flick that has a sweet and personal touch and will definitely keep the whole family entertained. Bautista continues to prove that he has great charisma, he has been great in the Marvel Cinematic Universe (MCU) films as Drax and here he is a little more grounded but still endlessly likable in this kind of role. I hope that he continues to blend comedy with action as he will be featuring in the upcoming adaptation of ‘Dune’ as well and continue his work in the MCU. Bautista’s chemistry with Coleman is fantastic, with the two of them providing plenty of witty banter and a lot of heart in their performances. The films structure feels very familiar, but with a family comedy that’s exactly what you want. I can see obvious influences from family films such as: ‘The Pacifier’, ‘The Game Plane’ starring WWE alum Dwayne ‘The Rock’ Johnson’ and ‘The Tooth fairy’ (also starring 'the Rock). These films all play well with a family audience and provide younger viewers with a strong sense of morals whilst also providing enjoyable viewing for adults as well. If you are struggling to find something to watch with the family during Isolation than look no further, ‘My Spy’ provides fun for the whole family, with a charismatic performance from Dave Bautista and a loveable debut from Chloe Coleman. This is one for that the whole family can enjoy.

Review of My Spy by Peter Walkden

JJ (Dave Bautista) is a CIA agent who lives for the action-filled moments that his job offers him daily. After completing another successful top-secret mission, JJ is paired up with a new partner and given a new assignment. JJ is to conduct surveillance on a woman and her 9-year-old daughter. Unfortunately for JJ, it's not long until the 9-year-old girl blows his cover and she decides to bribe JJ along with his partner.
Our leading CIA hero tries to negotiate with the young girl, but JJ cannot seem to find a way out of this situation and agrees to the young girl's terms. She requests that JJ begins to teach her the ways of becoming a skilled spy. JJ starts to teach the young girl skills such as nailing a lie detector test, general confidence and most importantly, how to walk away from a giant explosion without looking back. The young girl also begins to encourage JJ to pursue a relationship with her single mother, and romance even begins to bloom.
The introduction of JJ is excellent. We witness his skills as a CIA agent, and we get to some of his random type of humour. JJ, as a character, is also a strong man and lives for the action, but it's also apparent there's a dark past which haunts him. I also loved the supporting character of the 9-year-old Sophie played perfectly by Chloe Coleman. The dialogue between these two was also pleasing as they both managed to bring some laughter and heartfelt moments.
Overall, I found this film to be fun. It's filled with some heartfelt moments, and many jokes managed to gain a large laugh from me. Actor Dave Bautista has great chemistry with the 9-year-old girl who bribes him for spy training. If you're seeking something brainless and lighthearted, you cannot go past My Spy. Like I said, I am still dealing with the shock as I was not expecting to find this film so refreshing.
Peter has written this movie review for Sanity. See more from Peter here